BOA have successfully launched the Tetraspar Demonstrator Floater and Keel by use of the Semi-submersible BOAbarge 21 (92m x 31.5m x 6.71m) in the port of Grenaa, Denmark. The Floater and Keel was loaded-out by means of SPMTs and floated-off the Boabarge 21 in 2 consecutive operations. Each operation was executed in close cooperation between project teams of BOA and BMS, whereas BMS took charge of the loading operation while BOA took charge of shifting, ballasting and submersion of the BOAbarge 21 and float-off of the TetraSpar units.

Following the final assembly of the wind turbine, the combined structure will be towed and installed at the Marin Energy Test Center (Metcentre), off Stavanger.

The submerging capacity of BOAbarge 21 combined with the operational experience of the BOA team, contributed to the successful launching of the floaters.

BOA are grateful to be part of the realization of the first full-scale demonstration of an industrialized offshore foundation. 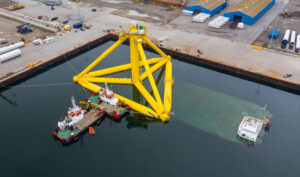 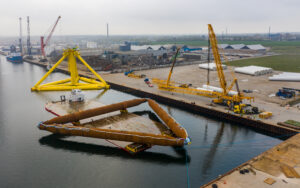